Skip to content
On Friday night, to celebrate hubby’s birthday as well as to get together with family and friends (and celebrate a few other birthdays) I’ve organised a night out in the city – just the usual dinner, movie and perhaps some poker afterwards. Originally, the plan was to just have dinner at one of the restaurants at Crown which was our central place to meet up. However, thanks to the powerful word of mouth aka Twitter – I’ve managed to change the plans just slightly and booked a table for 9 at The Provincial Hotel, Fitzroy.
Let me introduce you to the main reason for this change of plan:

Whole. Suckling. Pig.
Ah, but I won’t get to that yet.
The night started out with the first round of drinks at Hektor Woodleys, Abbotsford with hubby and his workmates straight after work. By the time we moved on to The Provincial, our guests were already there waiting for us at the bar and having drinks… oops! Sorry we were late guys, hehe.
Just after 7pm, we went to our table at the restaurant / cafe area of The Provincial and were promptly seated by the lovely Valerie – whom I must say took very good care of us throughout the night.
We started off with a selection of entrée platters to share:

House Made Ham Hock, Broad Beans and Fried Mozzarella
This entrée was absolutely amazing. As we were eating, the words “I love the ham” was as if it was on loop. One person said it, then the other. It was quite amusing, haha.

Warm Beetroot and Lentil Salad, Marinated Feta, Walnuts and Burnt Honey Dressing
The next entrée was surprisingly delicious. Now, the reason why I’ve said “surprisingly” is because I don’t like beetroot. I know I know, how can a foodie not like beetroot right? Well, this dish completely changed my mind about beetroot. I thought it was beautiful, and the flavors on this plate mixed so well together and I really must thank The Provincial for serving up such wonderful entrées they were both absolutely DIVINE!
Now, let’s move on to the highlight of the night. Are you ready for this?

The Provincial’s Whole Suckling Pig
You will need a minimum of 6 people at $75pp to eat this pig. We had 9 people. We really think we needed 12 people to actually finish the pig. It was sooooo rich! The meat was the most tender I’ve ever tasted, literally melted in your mouth. The skin was crunchy and crispy and there were lots of FAT. Gee piggie you’re a fattie! But obviously the fat contributed to the tenderness of this slow roasted pig and the natural flavors that oozed out of the pig.

The meat was served with mashed potatoes and some greens (I was too busy taking photos to ask specifically) and they were terrific accompaniments. Personally, I would’ve liked it if the pig was actually seasoned well before roasting – but I understand why it was just cooked naturally to bring out the natural flavors. So I had the salt and pepper closeby at all times, lol.

The meal was also served with a refreshing pear salad. Very refreshing to go with the richness of the pig.

Most of us even dared and tried the kidneys. I personally didn’t get the chance to try it because, well, I was too busy taking photos. But the feedback I got from everyone else was that, it tasted really good BUT wait until the after taste kicks in… !! LOL not sure what they all meant but I’m guessing it’s got a fairly strong after taste. 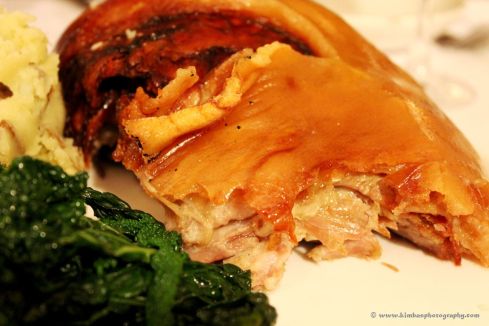 Overall, I was quite happy with the outstanding service from the very kind people at The Provincial. Food was fantastic. When I saw the Dessert Menu, I really wished we could stay for dessert! Unfortunately, we had to rush off to Crown to catch our movie and we were all so very full anyway, making room for dessert was impossible!

Oh, perhaps we will just have to go back there again. Eat something else that is less likely to fill us up too much, so we can actually indulge in some dessert. But what a meal, truly one of its kind. I would highly recommend you try it!
Please visit www.kimbasphotography.com to see the rest of the photos I took during the night, including pictures of the restaurant.