Skip to content
On a random Thursday night, hubby and I decided we will go out to dinner instead of cooking / getting takeaway. What an excellent idea! When deciding where to go, we were presented with the option of going somewhere close to work (aka somewhere on Bridge Road, Richmond) or somewhere close to home (in Berwick). We finally decided we would go somewhere close to home, just so we have the luxury of only driving 2 mins back home after dinner, instead of at least 40 minutes.
Hubby also decided he had a bit of work to do before dinner, so we decided we would go to dinner at 8pm. I’ve also invited our friends Mr T and Ms C to come and join us, and they spontaneously agreed. Aahhh.. the joys of being married couples without kids. We shall enjoy it while it lasts… 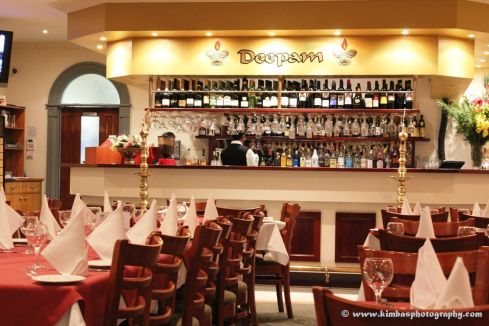 Deepam Indian Restaurant is probably one of the best Indian restaurants you will find in Melbourne, which is why we are so lucky to have it so close to home. It is usually jam packed on the weekends, and they sometimes even have live music on Friday / Saturday nights… but on a weeknight, it is so quiet we didn’t even have to bother making a booking or anything. The restaurant is HUGE, it can probably seat up to 150 guests? Which is why it seems even emptier when we arrived as only 4-5 tables were filled. It is also a TAKEAWAY restaurant though, so people do come and go with their takeaway orders throughout the night.

As soon as we were seated, our waiter (or should I say waiters, as they were 3 waiters on duty and only 4 tables filled!) brought out some papadums for us to nibble on as we decide what to order. 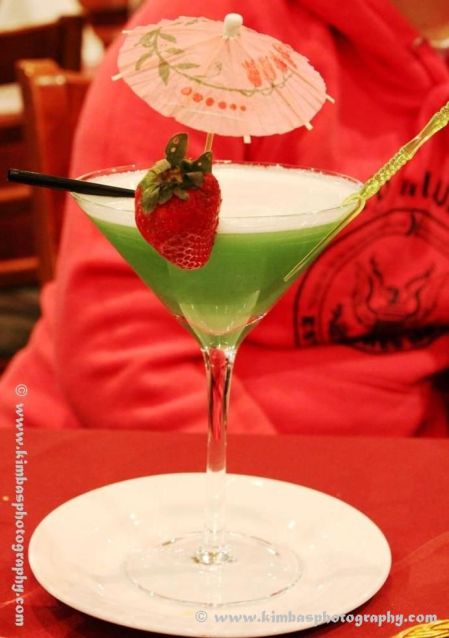 And we finally decided to go with Set Menu #2. 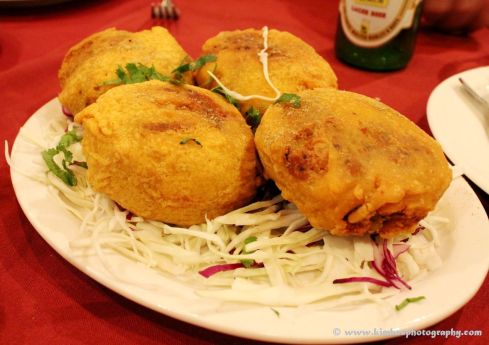 Our first entree was the “Potato Wada”. It wasn’t really anything special, it’s just some fried potatoes. But I was happy to dig in, as we were pretty hungry by then!

Our next entree was the “Chicken Tikka”. Now this was more my kind of entree. YUM!

As soon as we were ready, our waiters brought out all of our main courses. We had some Naan bread, Rice, Raita (Indian condiment / sauce which is yoghurt based), Chicken Makhani, Lamb Rogan Josh, Dal Makhani and Aloo Mutter.

This was the “Raita” aka yoghurt dip.

“Lamb Rogan Josh” was pretty mild for us, but the lamb was extremely tender. Two thumbs up!

“Dal Makhani” I believe are lentils and beans in a creamy butter sauce.

And “Aloo Mutter” which is a potato curry. To be honest, I didn’t even try this one, LOL. I was too full to have more potatoes! Didn’t need the extra carbs to go with my naan bread and rice either!

Finally, we were served our dessert the “Gulab Jamun” with Ice Cream. It is made of a dough consisting mainly of milk solids (often including double cream) and flour flavored with coconut and rose syrup. It was nice and warm to contrast with the ice cream so we quite enjoyed it.
Overall, we were very happy with our meal. Between the 4 of us, we also had iced coffee, a cocktail (as shown above), a bottle of wine, 2 beers, 4 glasses of muscat and we were served coffee and tea afterwards as part of the set menu. The total bill came up to an average of $50 per person which was not bad considering we ate until we were extremely full and had a few drinks.
So whenever you’re in the South Eastern suburbs area of Melbourne, feel free to pop in 🙂