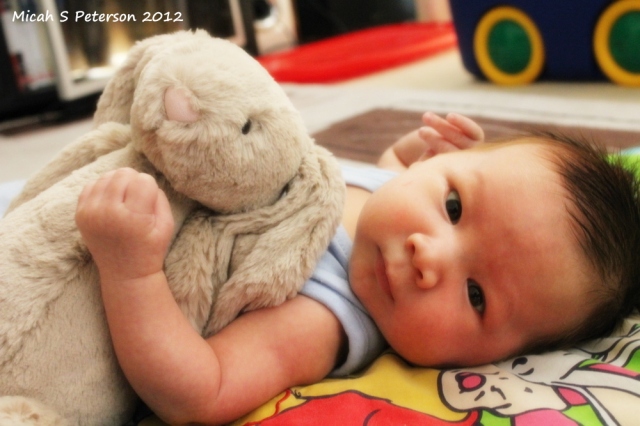 Being born in 2011 means that according to the Chinese Calendar, Micah was born in the year of the Rabbit. Also, having been to his 4-week routine nurse appointment this week and now weighing 5.52kg (gained 1 kg in the past two weeks) – Micah is officially our little Chubby Bunny!
Chubby as he is, I am so glad that he is feeding really well and that breastfeeding is going well for the both of us. So no complaints there!
This week, I was also hit by the sudden realisation that I can eat sushi again. Being pregnant meant no alcohol, no deli meats, no certain types of cheese and no raw seafood which meant no SUSHI! Sushi is like one of my favorite foods in the world, and now that it’s summer again – sushi is the perfect lunch treat! So on Wednesday, Micah and I took a trip down to Fountain Gate (our local shopping centre) to Sushi Sushi where they sell the best, freshest sushi in our area and I went and got my sushi fix. Today’s Saturday – and I craved sushi again, so off I went to Fountain Gate again while hubby stayed at home to keep an eye on the little man!

That’s basically it this week. Another week at home with the little man. Some days are good, some days are bad. He usually sleeps much better at night, he’s a lot fussier during the day now. At least we had some cooler days in Melbourne this week after the 3-day hot temperatures over last weekend. It was great to have friends over for dinner on Thursday night (although they brought dinner so we didn’t have to do anything, lol) and then spend an evening with family on Friday night at my brother in law’s birthday.

Micah gets “upgraded” to a cot starting tonight, as the bassinet is starting to get a little bit “crampy” and too small for him. Whenever he waves his arms around (usually when he successfully wiggles out of his wrap) he would just startle himself by hitting the sides of the bassinet! So onto the cot he will go… hopefully he will get more restful sleeps in this cot.

So thankful for family and all of the hand-me-down baby furniture and clothes!