I have always given Micah complete freedom and independence when it comes to eating. The day he was born, I lay him right in the middle of my chest and allowed him to find my breast on his own. This process is called Baby Led Attachment which basically allowed Micah to follow his natural baby instincts and increase our chance for success in breastfeeding naturally. I’ve also given him the freedom to feed whenever he wants aka Demand Feeding. The result, is of course a confident breastfeeding mum and a happy breastfed baby. We have had absolutely no issues at all with feeding, and Micah thrived in his development and reaped all the benefits of breastfeeding. 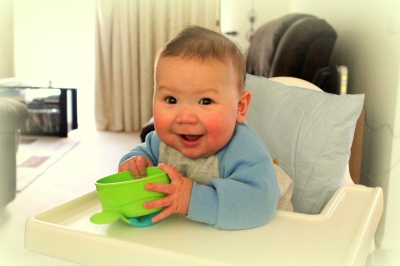 Obviously Micah is a clever little boy who is clearly quite a foodie himself like his mummy. So, I trust him once again to have full control when it comes to starting solids. He is almost 6 months old, which is the recommended age to start Baby Led Weaning. On Mothers Day, we sat Micah on his highchair and he seemed to be sitting upright on his own quite comfortably. So, by dinner time we were sitting there having a meal with Micah just playing with his bowl and spoon.

That was when I decided to “test the waters” and see how he would respond to a couple of finger foods. He doesn’t have to eat them in the first few weeks, even months – apparently the first few weeks / months are meant for exploring and improving his hand-eye coordination and letting him “practice” picking food all by himself and taking them to his mouth and gnawing/chewing and getting used to various texture and flavours of food. 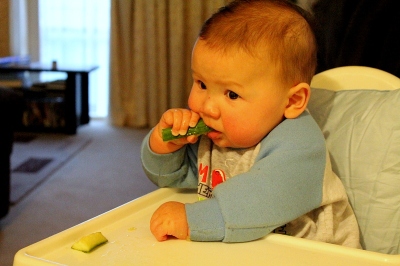 Micah was absolutely brilliant – it was his first time putting ANYTHING food in his mouth all on his own, and he looked like a pro! I started with a couple of sticks of raw cucumber and he just grabbed it and took it to his mouth and started chewing! Of course he only chewed the soft part of the cucumber. I left the skin on to make it easier and firmer for him to grab.

He did pull a few funny faces when he realises that the “thing” he just picked up and put in his mouth was actually nice and cold and had a strange, new flavour to it… lol.

After a while though, he just went absolutely nuts and kept chewing the cucumber. He was absolutely lovin’ it! Some of it spilled right back out of his mouth, whilst some actually stayed in his mouth and disappeared and I know I saw him swallow! It doesn’t really matter at this stage, he is still getting his main meals and nutrition from breast milk so he can take his time and explore all these different foods aka “new toys” as much as he wants even without actually “eating”.
The “eating” part will come naturally in a few months when he realises that he can handle food better, chew and swallow better and actually get quite full when he’s done – but that comes later.
So clever…. so I decided to try giving him some sticks of steamed carrots too. Just firm enough to grab, but soft enough to turn into mushy bits when he starts chewing.

What a clever little foodie, he didn’t need much encouragement at all! He just picked them up (the carrots were just a little bit harder to pick up because it’s a bit slippery and moist) and once again started chewing! No pulling funny faces this time, so he must’ve loved the flavour.

Ohhh… it brings me so much joy to watch him explore food!! He is going to be such a clever little foodie I can tell already, and I love giving him this freedom because it will make him a confident little eater and it will make family mealtime much more enjoyable. I don’t have to prepare separate foods for him, I can sit and enjoy my own meal as Micah feeds himself because I don’t have to spoon feed him, yes he will make a terrible mess but that’s all part of learning and eventually he will get so much better at it – the mess will eventually not be too messy!
By introducing food to Micah this way, I am hoping all the different textures and flavours from all the vegetables, fruit and meat I will eventually give him will make him more likely to be adventurous with his food – like his mum! He is learning all the individual textures and flavours of different foods without getting confused with a mixture of various flavours most pureed foods offer. Involving Micah during our mealtimes would also keep me in check when it comes to preparing food – I am now more aware that we need to have more healthy veggies and fruit in our meals, and the meat will be cooked healthily with very little or even better no salt and preservatives. I might make a lovely sauce to go with our meals / pasta that we “adults” will have but Micah will have the plain pasta and the non-seasoned meat! So in a way, because Micah is only allowed all these healthy foods – he is making sure WE eat healthily too! Exciting times!