Skip to content
It is Father’s Day today in Australia, I said in Australia because I know a lot of other countries celebrate Father’s Day in June! So people all around the world on Twitter would probably be all confused and wondering why we Aussies constantly tweet “Happy Father’s Day” today, well because it IS today. First Sunday of September. That’s our Father’s Day. It’s weird like that, but that’s how it is haha.
This weekend is also the first weekend of spring, so we were greeted by beautiful sunshine and warm days (although in Melbourne it still gets pretty chilly because of the wind). We thought it would be a great idea as a family to get together and celebrate Father’s Day at the Caribbean Gardens Market. It was a great day out, we had a picnic lunch out in the sun and then went walking around the market browsing through the stalls and did a little bit of shopping.
It was also really great to have our good friends Vince and Leah and their twin babies join us there today. After all, both Vince and my hubby are first time fathers this year so it’s great to be able to celebrate together. We are so blessed to have good friends like them who have shared most of our special days for many years now! Here’s to many, many more special occasions and celebrating together 🙂 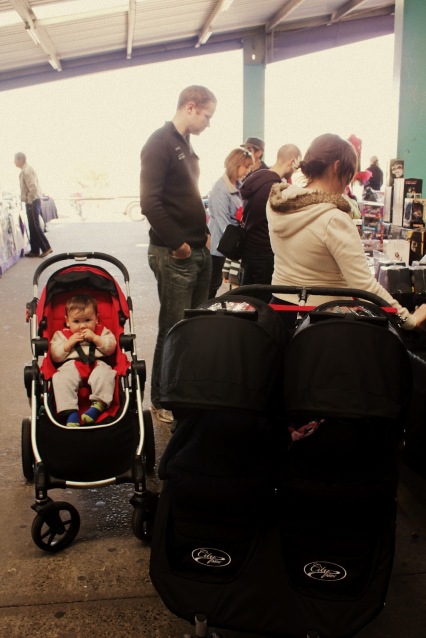 We had quite a productive day shopping at the market too! I was very pleased with my new pair of sunnies, and hubby bought a few sketch pads and a new belt, and a couple of webcams. Micah was good most of the time, but towards the end he got really tired and it was time to go home… poor Micah barely had any sleep today, he basically ONLY slept in the car today. On the way to the market and on the way home.
When we got home, I tidied up the house a little bit and gave Micah dinner and a bath, and he was in bed sleeping soundly by 6.30pm. It’s been a big day, so no cooking for me tonight. Ordered Chinese takeaway online and waiting for food to arrive now. So yes I had a wonderful weekend!

Oh, and what presents did hubby get you ask?! Well, other than all the stuff he just bought from the market today, I got him a personalised stubby holder with a picture of Micah wearing a top which says “My Daddy Rocks” and “Happy Father’s Day 2012”. The idea is that I will make a stubby holder each year with a different photo of Micah so hubby will end up having a collection of stubby holders with photos of Micah as he grows up! How cool is that?! And I also got him “The Avengers” movie on Bluray.. which we ended up watching last night because I am terrible at keeping secrets or keeping things as a surprise. In fact, hubby got his stubby holder two weeks ago because it arrived in the mail, and he picked it up from the letterbox and gave it to me, and I was like “What’s this? I don’t remember ordering photos from Snapfish”, and it ended up not being photos because I forgot I ordered the stubby holder, and I was like “Ohhhh….” and he was like “What, what is it?” and I was like “I can’t tell you” and he was like “Why not?” and I totally couldn’t keep it in I just went “Ohhh alright then it’s for you for Father’s Day!” and showed him the stubby holder…….. and he went “KIM!! You’re terrible. Now you’ve ruined my awesome surprise”.
Oh well, at least it is still awesome and a surprise two weeks ago… :p