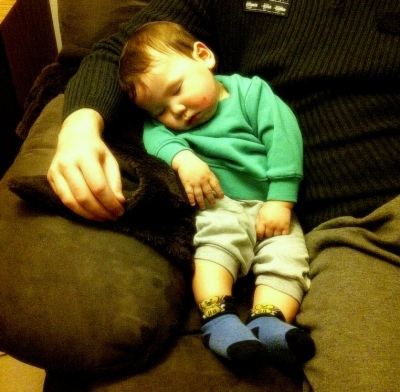 My poor baby boy is not well. We first noticed on Sunday morning just before church that he had a temperature. We took his temperature and it was 38 degrees. Higher than usual, but not high enough to rush to the hospital. So we gave him some Panadol and he soldiered on the rest of the day and even had lots of fun out at the Caribbean Market on Father’s Day.
The next day (yesterday), those nasty spots have appeared. All over the lower part of his face and especially bad on his hands and in his nappy. I rang up our GP and got an appointment for 4.30pm. Yesterday was probably one of the longest days I have ever had to deal with. Micah had trouble falling asleep – I tried everything, feeding, rocking, cuddling, he just wasn’t falling asleep and by noon he was looking more and more tired and grumpy.
Hubby then suggested I take him out for a drive and see if he would sleep in the car. He suggested we could do lunch together, so I drove to hubby’s workplace. Micah did NOT fall asleep on the way there, but he got really close. So I decided after hubby picked up some lunch that I will just keep driving, wherever the roads will take me, in hopes that Micah will finally fall asleep. This time he did, and I kept driving … along the scenic route home and ended up at Cardinia Reservoir. 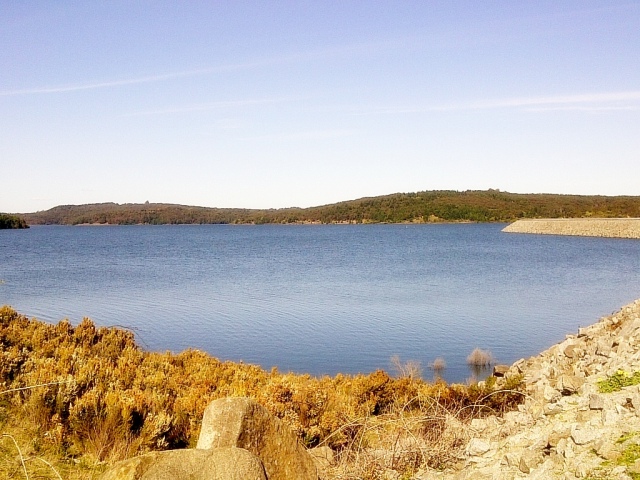 It was such a beautiful day and I tried to take Micah out for a walk so he would fall back asleep (he woke up after 30 minutes) but no luck. I tried to feed him some lunch but he refused. He wasn’t a happy boy. At this stage it was almost 2pm. Still another 2 and a half hours to go until I see a doctor and figure out what is wrong with him. I rang up other clinics in the area to try and get an earlier appointment, no luck. I even drove to NarreGate Medical Centre and it was packed full of people waiting to see a doctor. This whole time, Micah just kept crying and crying…. I got a little bit sad and cried while driving as well, it is so unusual for him to cry while in the car. The car usually fixes everything. He must’ve been really upset over something.
We went home, and I gave him lots of cuddles and he was happy enough to smile and play with his toys. That made me feel a lot better. His spots have gotten worse, but he doesn’t have a temperature and was playing happily so I wasn’t concerned. Finally, it was time to head over to the doctors. We arrived at the doctor’s 15 minutes early, and Micah had fallen asleep. So, I rang the receptionist and asked if I could wait in the car so Micah can continue sleeping… she said no problem, she will wave when doctor is ready to see us. So I waited in the car and Micah got an extra 15 minutes sleep, every minute counts!!
So we FINALLY saw the doctor and she knew as soon as she saw Micah that he had Hand, Foot and Mouth disease. Hubby was worried it could’ve been Chicken Pox, it definitely wasn’t chicken pox. What’s strange is, we don’t know how Micah caught it! It is very commonly spread at childcare centres, but Micah doesn’t go to childcare. There is no real medication for this virus, we just had to wait it out and the spots will go away within a week. Panadol can help if he has a temperature. Micah might lose his appetite and refuse his solids (which he is) due to ulcers in his mouth so offer more frequent breast feeds to keep his fluids up, which is what I am currently doing.
Thankfully, Micah slept really well last night from 7.30pm – 6am (although it was a struggle getting him to fall asleep which is why hubby was holding him on the couch and he finally fell asleep as per photo at the top of this blog post) so thankfully I got to have a good rest last night after one very long day. He barely touched his breakfast this morning so I gave him an extra breast feed. He went to sleep just before 9am this morning, and is still asleep now (10.30am) so YAYYY that is improvement already compared to yesterday!! He is still grumpy and cries a lot more than usual but we will get through it.
This is only the second time Micah has ever been sick, so I don’t have a lot of experience when dealing with a sick kid! Naturally, I was quite a mess yesterday but it’s all fine now. We are stuck at home, because Micah is very contagious… but hopefully he gets well quickly so we can get back to being normal again!
Of course, his photoshoot this Friday will need to be rescheduled. To think I was worried about a little bruise on his forehead last week, and now he has spots all over his face!
References:
http://en.wikipedia.org/wiki/Hand,_foot_and_mouth_disease
http://www.babycenter.com.au/baby/health/handfootmouth/

One thought on “Week 39: Hand, Foot and Mouth Disease”