Skip to content
Hello again everyone! I really hope you guys have enjoyed reading my previous blog post featuring Nu’s Restaurant in Sydney. I’ve also had some really good comments on the pictures I took of the city at night. If you’re curious, my camera is a Canon EOS 550D and I only got it about a month ago as you can read in this blog entry.
So, back to Sydney – I was up bright and early the next day and the view were still breathtaking. I just don’t know how people who live in Sydney just get “immune” to how beautiful their city actually is. 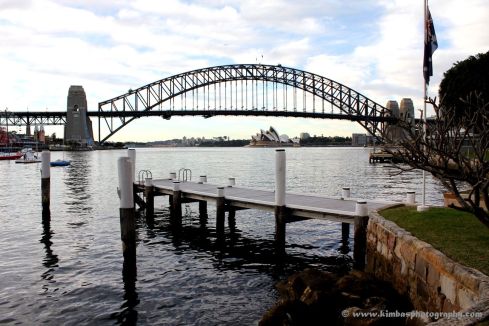 This was the view from the front of the apartment.

The apartment has a nice pool / BBQ area. Too bad it was too cold to go for a swim, lol otherwise it would’ve been awesome to just swim in that pool and enjoy the view!

View of the sailboats at day time – I think I personally prefer my night shots from my previous blog post. There’s something about the lights that make me go “oooooo…”
For the rest of the day, I spent most of my time in the office attending a company conference. After work, we went back to our apartment, freshened up, and then caught a ferry from McMahons Point to Circular Quay for dinner.

This is the Overseas Passenger Terminal @ Circular Quay West… The famous “Quay” restaurant from MasterChef is just 100m walk down from where this photo was taken. 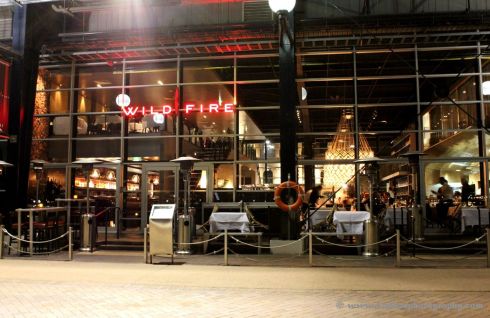 This is where we were going to have dinner: WildFire Restaurant.

Not surprisingly, the restaurant was already full and buzzing with activity. How cool do the chandeliers look?!

And as you can see, the view of the Sydney Opera House from the window!

The seafood bar… where everything looked amazingly fresh and inviting, but we weren’t there for seafood.

We were more interested in these guys over here.. where they prepare woodfired meat and seafood dishes.

This was what we ended up ordering: Wood Fired Churrasco with a selection of tapas that have been created to compliment the variety of fire-roasted meats, poultry, homemade sausages and seafood. 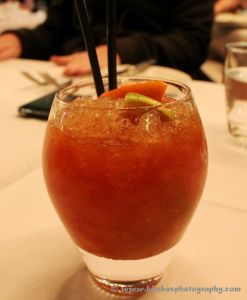 To start of, of course we ordered some cocktails. Sorry I don’t remember what was in any of these cocktails, lol.. but this one was call “Straight Up”

And this one’s called “Surprise Me”

And I really had no idea what this was.. I literally told the waiter to bring me something nice.

To start off with, we had some sour dough. 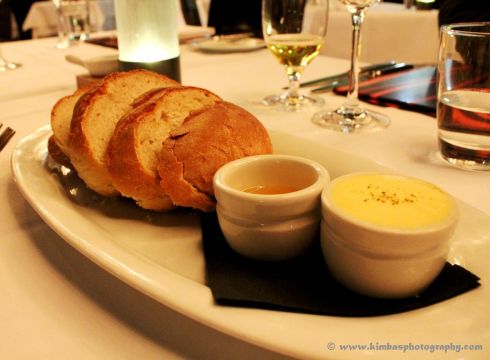 And some flat bread.

And then we were served some prosciutto appetizer thing..

And some of us ordered some oysters… 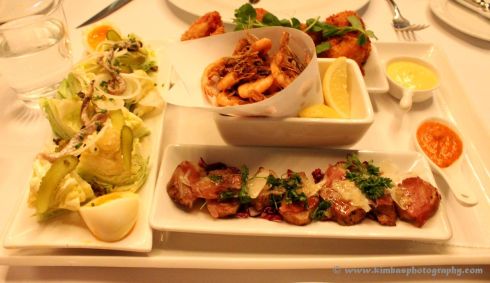 And finally our platter of entrees and tapas have arrived! Don’t they all look yummylicious?! On the far left is an open caesar salad, followed by crumbed bell peppers at the top, moving down to some grilled shrimp and I think the bottom one are some artichoke… I think. I might be wrong. I was too busy taking photos when the waiter explained what everything really was! 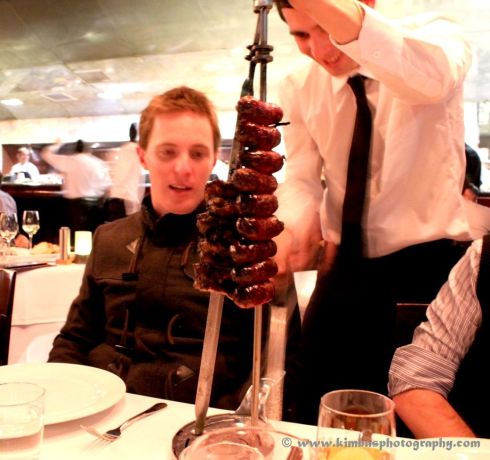 Here’s the highlight of our night – when the MEAT really just started coming in all the time. We were just getting a constant serve of meat on a stick, it wasn’t funny. These homemade sausages and chicken were so delicious!!

Our meat servers were all kind enough to pose for a photo. And like I said, they just kept coming and offering us MORE meat!! 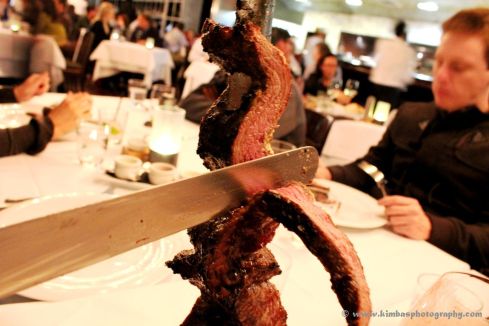 We had all the meat you can ever name… chicken, beef, lamb, pork… and they were all cooked to perfection and so tender and beautifully marinated.

My plate just kept filling up until I could no longer eat or look at another piece of meat! 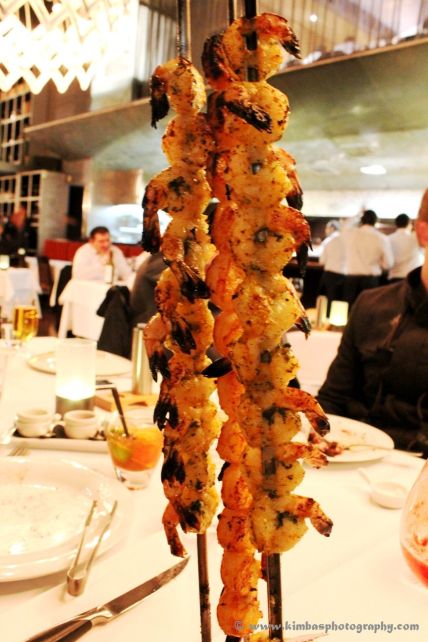 And yes, we also had seafood! Prawns!! I could eat the whole stick of prawns, lol. 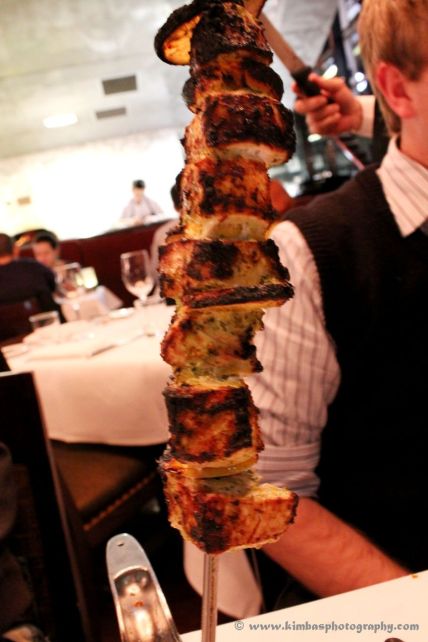 And the swordfish wasn’t too bad.. it was a bit salty, but that’s how it’s supposed to taste anyway. It was OK, but by then I was already very full! 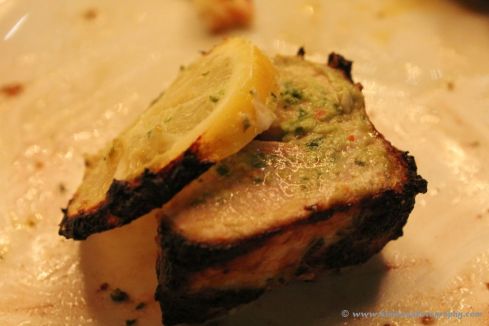 Swordfish up close and personal.
Overall, I must admit the WildFire experience is different to what we had the night before. WildFire is exactly what you will get at say, Bluefire Grill @ The Docklands, Melbourne (which I have been to before) so it wasn’t a new experience for me. For some other people on my table though, it was their first time so they were very impressed. I mean, we had all the meat we could eat! At the end of the day, it was good value for money – the service we had was spectacular, and it was a great venue to socialize with our team members.
Speaking of service, I must highlight a few things the staff at WildFire did for us which really impressed me and motivated our generous tip.
So well done to the team at WildFire for looking after us. Like I said, it was a different experience to Nu’s the night before, so I can’t really compare apples and oranges. Although I think I personally prefer our dining experience at Nu’s only because of the burst of flavours that generally is offered by more exotic food options such as Thai.
Anyway, as we walked out of the restaurant, I took some more random shots. 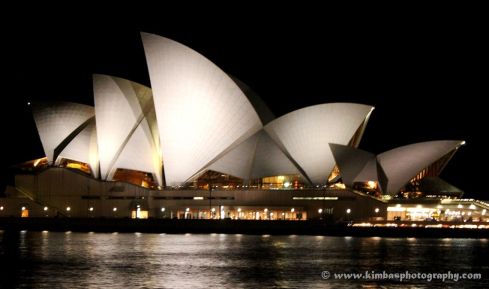 I had a pretty close view of the amazing Sydney Opera House.

And again, just how beautiful the city looks at night!