Skip to content
I think I might’ve missed the season for eating “Bak Chang” a couple of months ago, in fact I don’t even know when exactly is it! It all started last night when friends on Twitter reminded me that it was the Lantern Festival tomorrow and therefore I should go out and get some mooncakes. Yes, I went out and got some mooncakes alright… but as soon as I saw these Bak Changs just sitting there right next to the cashier, I couldn’t resist buying some for dinner! NOM NOM NOM…
Good thing I did, we only got back from soccer at 8pm and were absolutely starving and these Bak Changs have already been prepared they just needed to be steamed!

I actually got a variety of Bak Changs. Some are called “Sue’s Bak Chang”.. obviously made by a famous local lady named Sue, haha. Others were Nonya Bak Changs and some were the “Traditional / Classic Bak Changs”.
These Bak Changs are basically glutinous rice wrapped in pandan leaves with various filling in them.. depending on the type of Bak Chang. To find out more, please see our ever dependable Wikipedia pages.. lol.

Basically I just let them steam in the steamer for approx. 30 minutes and they’re ready! Of course, making the Bak Chang themselves from scratch would’ve been a HUGE chore. You can find some amazing recipes on the internet. I have listed some recipes here:
And of course you should probably watch various YouTube videos on how to fold the leaves around the glutinous rice, looks rather complicated I’d rather stick to buying delicious Bak Changs made by the experts thank you very much!! (70% foodie who loves to eat, 30% home cook who loves to cook WHEN TIME PERMITS, lol)

Once they were ready, because I bought a variety of Bak Changs it’s always nice to be surprised by what’s inside. This one in particular had some pork and water chestnuts. 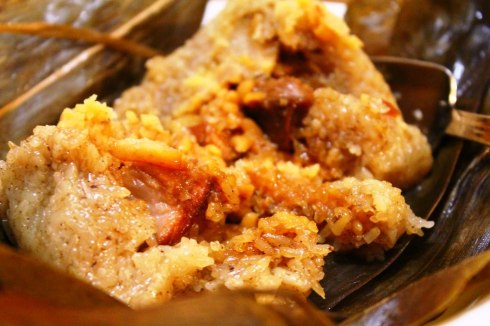 But these ones were the best!! These had PORK BELLY in it, which made the texture of the meat inside nice and juice (and fatty, lol) and it tasted a lot “sweeter” than all the other ones. These were the ones made by that lady “Sue” sooo awesome, I am tempted to go back to Glen Waverley tonight and buy more, more and MOREE!! (So “tham jiak” hahahahaa) Already bought so many mooncakes too.
Anyway, this was just a fun post. Mostly to just be mean and make some of you drool..