Skip to content
Hello everyone! I know I said I might be “MIA” for a while but the cruise is still 4 days away and I’ve just had a pretty exciting weekend I would like to share with all of you! Apologies for the quality of the photos in this post – they are not as “fancy” or as “vibrant” as my usual photos taken with my DSLR… and that’s because all photos in this post were taken with my BlackBerry Torch mobile phone.
This post will not be my usual Kimba’s Kitchen blog post anyway, so I won’t be posting it up on FoodBuzz or anything. Just something I would love to share with all of you 🙂
So, my little “adventure” started on Thursday night. My workmates and I went straight to the Melbourne airport after work to catch a 7.45pm flight to Sydney. We got to the airport at 6pm so we went to the Irish pub for a drink and early dinner.

I had the “Twice Cooked Pork Belly with roasted Egg Plant”. The pork belly was delicious but for some reason the eggplant was even more oily than the pork belly! I have to admit I would’ve preferred the pork belly cooked three times with a crispy skin.. but oh well. Moving on.. 🙂
So we arrived in our hotel in Sydney, the Harbourview North Sydney hotel at about 9.15pm and we had another round of drinks at the bar at the lobby before going up to our individual rooms to have a good rest before a big day the next day.

This was my spectacular view of the Sydney Harbour Bridge from my hotel room!

The “see through bathrooms” kinda made me giggle, lol.

Friday morning, rise and shine! It was my birthday! And this was what I had to wake up to! It felt incredible, I had a good sleep because the bed was very comfy, the only thing missing was my hubby… but that part of the story is still yet to come, hehe.

Breakfast was nice and early at 7.30am. It was the usual hotel buffet styled breakfast. Was good 🙂 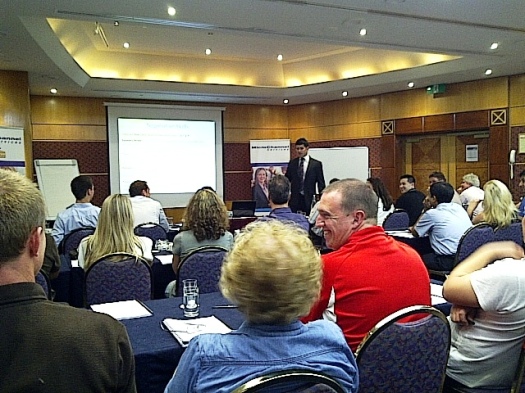 And then we went into the conference rooms in the same hotel and had our annual company conference / training for the whole day. The sessions were quite interesting! It went really quick 🙂 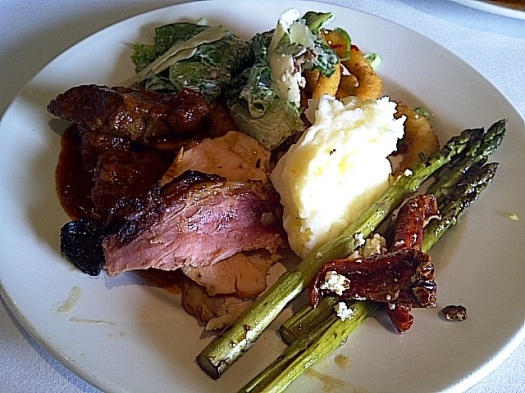 We also had an extravagant buffet lunch! Lunch was amazing, the food was like.. dinner! Roast turkey, boeuf bourguignon, calamari, mashed potatoes, variety of salads, etc etc. Desserts were also incredible we had chocolate mousse, pavlova, cheesecakes, etc etc.. but I was too full for dessert by then. I couldn’t risk falling asleep in the afternoon sessions of the conference!
Finally, it was time to party. Our Christmas Party was held at The Deck, Restaurant at Luna Park. We had the Sonar Function Room all to ourselves and all I can say is – the FOOD was incredible and the service was really good and we had a fantastic night!

Each table had a selection of food to share. Our first entree was a Poached Salmon and Fresh Herb Roulade with a Honey Mustard, Dill Dressing – was superb!! 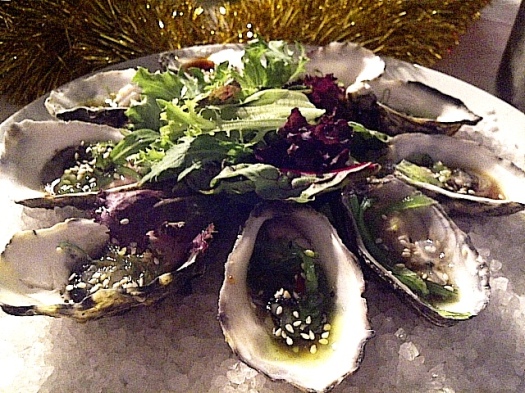 Freshly Shucked Oysters with Wakame Seaweed and Ponzu Dressing – I love oysters so I had no complaints! These were fantastic and fresh and some people didn’t like oysters so I got to have TWO!

And the Panzanella – Italian Bread Salad, Tomatoes, Cucumbers, Onions, Fresh Basil, Olives and Red Wine Vinegrette – just a refreshing taste to go with all the other entrees 🙂

Moving on to mains – we had the Stuffed Roast Chicken with Caramelized Onion, Zucchini, Pine Nuts and Raisins. The chicken was a bit dry.. boo.

But the Seafood Paella was incredible!! It had prawns, squid, Spring Bay mussels, chicken, confit pork belly and chorizo with saffron rice. It was one of the best paellas I have ever tasted. 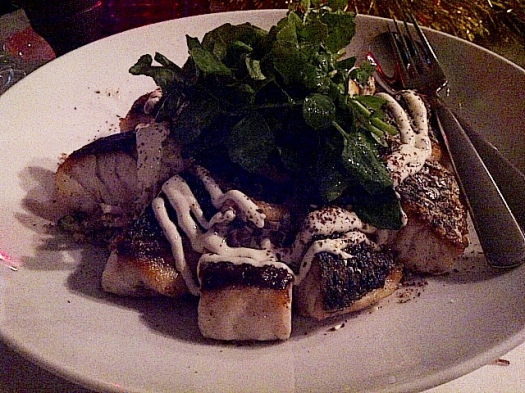 Followed by the Zaatar Crusted Barramundi Fillet with a Bulghur Wheat Salad and Tahini Yoghurt Sauce.

And a Slow Roast Gippsland Sirloin with Watercress and Vinegared Onion Salad and Port Wine Jus. So tender! By then, we were all getting quite full! And all the mains were served with green salad and shoestring fries! 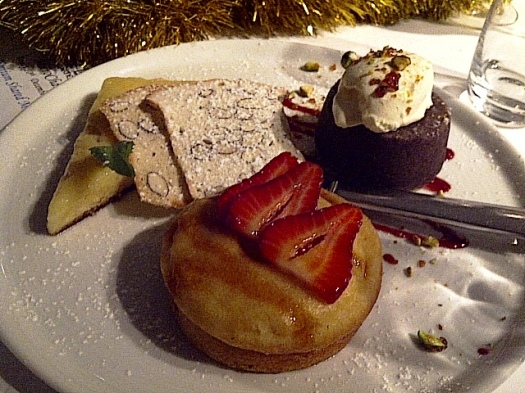 Desserts were: Flourless Chocolate Cake, Pistachio Praline and Whipped Cream, Lemon Delicious Pudding and Crispy Ginger Wafers, and Savarin with Passionfruit Curd and Fresh Strawberries.
I didn’t even get to eat desserts because we were already up and dancing, haha.

And a selection of perfectly aged Australian and European cheeses, fruits, quince paste, oatcakes, and lavosh crisp breads to finish. Whoa we were spoilt!
And here’s the part of the “special surprise”… 🙂
After the Christmas Party, a bunch of us were headed to our “after party” at a nightclub. As we were getting out of the cab and walking towards the nightclub, guess who showed up! HUBBY!! Hubby was supposed to fly back to Melbourne after being in Tasmania for work all week, but instead he’s decided to fly to SYDNEY to surprise me for my birthday!! Oh it was an incredible night, I got to spend my birthday with hubby after all and he got to meet all my workmates and we had a great night and it was just such a lovely, wonderful surprise!!
The next day, Saturday, we had buffet breakfast at the hotel again and checked out at 11am and went straight to Sydney airport and caught a 1.15pm flight back to Melbourne.
As soon as hubby and I hopped off the plane, we drove straight to the Pakenham Play Centre to celebrate our nephew’s 2nd birthday. He and I share the same birthdate, so the whole family was there to celebrate his birthday followed by a birthday dinner at Sage Restaurant in Berwick afterwards.
So, once again, a series of restaurant dinners… (I’m starting to get a bit lazy, this post is getting too long, so please bear with me as I start to make this really quick, lol) 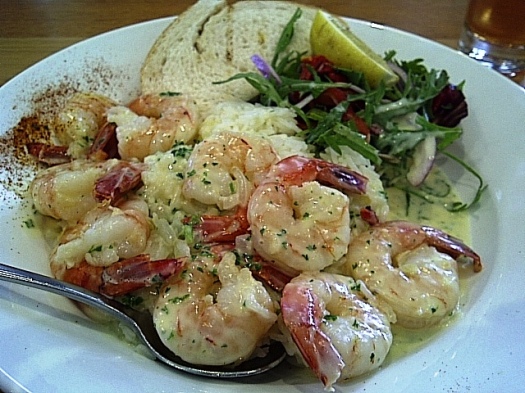 I had the Garlic Prawns, it was really good, except there wasn’t enough sauce!! I like my Garlic Prawns with lots of sauce thank you!

Hubby had the Braised Lamb Shanks, he was extremely happy with it except for the mashed potatoes weren’t anything fancy.. but the shanks were definitely a winner! 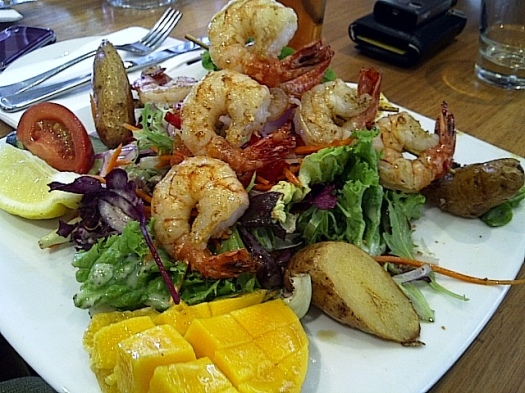 Sister in law had a wonderful Prawn and Mango salad.

Brother in law had Grilled Lamb Skewers. Other family members were sitting too far so I didn’t bother taking other pictures, lol.
After dinner, I went home and crashed. 13 straight hours of sleep. Bliss!!
Sunday morning, we went to church as usual and then had a relaxing Sunday afternoon…
And then on Sunday night, we went to Shanika’s in Berwick for a dinner gathering of the music team. There were about 18 of us and we were all going to have a Set Menu. Hubby, however had only 45 minutes to stay at dinner as he had to rush to the airport to catch another flight back to Tasmania for work, so he ordered a main separately. 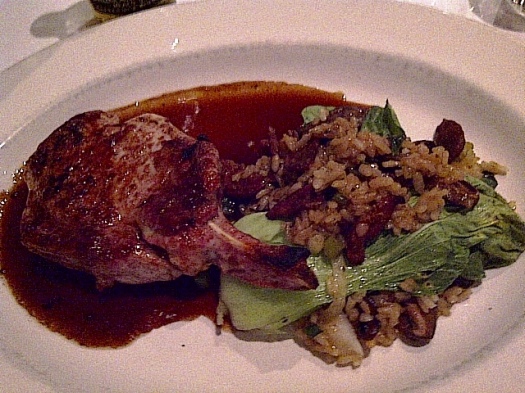 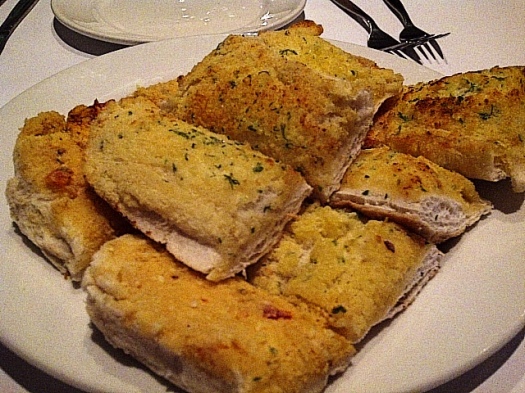 The rest of us, had Garlic Breads to start with… 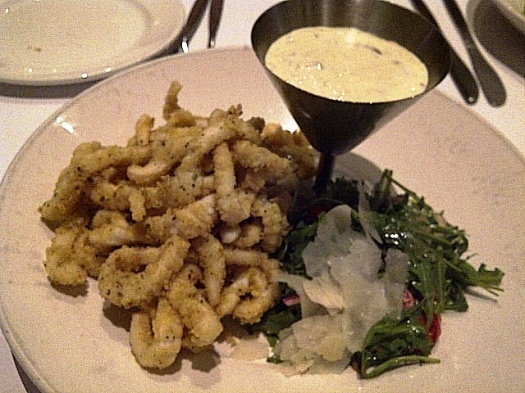 Followed by Crumbed Calamari for Entree..

We had 3 pasta dishes as mains… 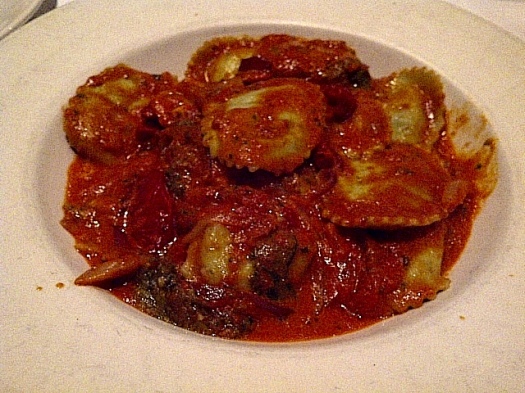 But I only got the chance to photograph two pasta dishes…

The VEGETARIAN dish was very fancy!! 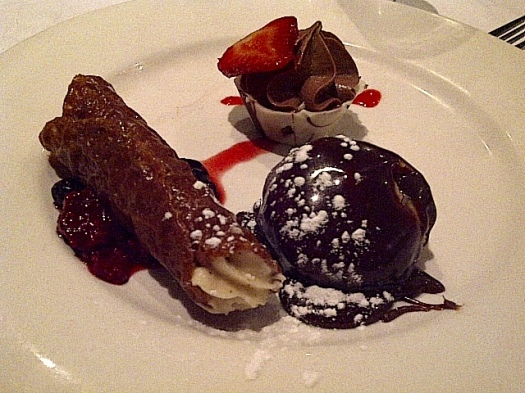 And we finished with a very delicious plate of dessert.. each! Brandy snaps, Profitteroles and Chocolate Mousse in a White Chocolate cup!

I think I have definitely over-indulged this weekend. I’m going to starve myself the rest of the week now, and then continue my eating fest when we board our cruise ship on Saturday!

35 thoughts on “Birthday / Christmas Party Weekend in Sydney .. and a special surprise!”